It’s been almost 10 years since I first heard of Sunday Suppers. Karen Mordechai began hosting these gorgeous dinner parties in her Brooklyn apartment, and the idea of a simple, beautiful dinner party where guests would gather to collectively cook a multi-course meal and then share stories around the table was one that I SO longed to be a part of.

Despite the dates never lining up for me to attend one of the New York gatherings, I’ve always wanted to host something similar in Charlotte. Cooking and breaking bread with people you know (or don’t know) have grown to be a passion of mine over the years. So when Sunday Suppers announced in January that they were launching a global dinner series and were looking for hosts in cities around the world, I applied without hesitation!

— It’s that time after a meal when the food is gone, but the conversation around the table continues.

Last week, I received the wonderful news that I was chosen to host for Charlotte:

If you’re in the Charlotte area, I invite you to join me for what will be an incredible communal cooking & dinner experience. Please click here to purchase tickets. Space is limited, so get your ticket before they sell out.

Even if we don’t know each other that well (or even at all), my hope is that we can all gather, cook together and break bread (squid ink tortillas to be exact!) over lively conversation around the table. Surely there will be no strangers after the meal is finished! These dinners will be held four times a year around the globe and anyone can participate.

The menu has just been released and it sounds amazingly bright and festive — celebrating summer and all its glory:

A portion of the proceeds from each dinner will go to The Hunger Project, a global program based on an innovative, holistic approach, which empowers women and men living in rural villages to become the agents of their own development and make sustainable progress in overcoming hunger and poverty.

If you have any questions or want to attend, please shoot me an email or click here for ticket information.

I’m a devout sushi lover. If I’m being honest, I’m actually borderline obsessed. My sweet husband no longer asks me where I want to grab a spur of the moment meal because he knows the answer is ALWAYS sushi. It’s not just rolls either, I actually prefer sashimi style and usually am pretty adventurous when it comes to trying all the raw fish options.

My mild obsession with sushi began in college when I was a wee bright-eyed, extremely naive southern gal. I had recently befriended one of the most incredibly creative people I have ever met, Shigeharu Kobayashi…or affectionately known as Shige. His family owns one of the oldest and BEST sushi restaurants in Columbia, SC, and Shige was quite dismayed when he learned that I had NEVER tried sushi before. He sat me at the sushi bar, made me try everything and THEN told me what they were. 🙂

It was the best introduction to sushi because I was able to tell what I liked by the flavor, the taste, the texture without being turned off by any preconceived biases I might have had toward certain seafood just by the name. Fast forward through the past 16 years of a blossoming love of all things sushi. I’m forever in debt to Shige for introducing me.

But this post isn’t about sushi. That was a long a## introduction to bring me to the point of this post which is all about POKE. Insert another raw fish obsession (and one I would not have ever tried if it weren’t for Shige.)

Poke is a raw fish salad in Hawaiian cuisine, and served as an appetizer or sometimes (all the time in my opinion) as a main course. Pronounced POH-KEH, not poke (just in case you were still confused.)

You had me at raw fish salad. Poke really started to pick up some restaurant real estate in Charlotte starting back in 2017. While there are some asian restaurants that also serve poke bowls (or added to their menus when the trend started to get legs), the QC now has quite a growing list of Poke-dedicated establishments.

Last I saw, there were already 15+ places you could get a poke bowl. I’ve been to a few, but here are my current rankings for the growing Poke-dedicated establishments in Charlotte:

Still on the list for me to try, Umami Pokerito in Pineville. I’ve heard really great things, but to be honest, it might take me awhile to get here because I’m TOTALLY spoiled being within a 10-minute radius from all the others. If it takes me more than 10-15 minutes in the car, I usually punk out. We will see:)

Looking forward to….Pokeatery…this will be the first East Coast location of the rapidly-growing Bay Area restaurant from husband and wife duo Derek and Joann Chung. They are currently scouting areas to open in Charlotte and I, for one, vote for MY amazing neighborhood…Oakhurst. We desperately NEED more restaurants and FAST. Our incredible Common Market can’t be all by it’s lonesome anymore and don’t even get me started on McBonie’s. No.

What’s your favorite Poke in Charlotte and why??

My love for hip hop originated with my very own dad…no kidding. My parents had me at the ripe age of 19yrs. old, so my formative years were spent growing up “with” my parents in their 20s. My dad has always been a lover of a good beat & the man has GOT some rhythm. Actually, if you know any of the Boulware’s from Ridgeway/Winnsboro, SC, you know we’ve got some smooth moves on the dance floor. My dad personally requested that our “father/daughter” wedding dance be to Ciara’s “1, 2 Step” in lieu of some of your more traditional song choices. Yep, that happened.

We officially celebrated my dad’s 55th birthday this past Friday with a family dinner. Lasagna is one of his favorite meals so it HAD to be on the menu for the evening. I’ve made traditional lasagna before, but this time, I really wanted to try something different. Also, one of my biggest frustrations with traditional lasagna is that no matter how long I allow it “set,” it always becomes a gooey mess {albeit delicious, but messy} on the plate. I decided to test these rolls to see if this method would help contain the “goodness” a little better than flat sheets. And it did!

I’ve always heard that music is to cooking like coffee is to the morning. It fills the kitchen with a necessary energy and a creative spirit unlike any other. I believe these lasagna rolls turned out as good as they did due in large part to the assistance of my trusted hip hop playlist. When you try this recipe below, be sure to turn up some tunes (preferably ones that get you moving…it helps with the rolling<3)

Scroll down for recipe 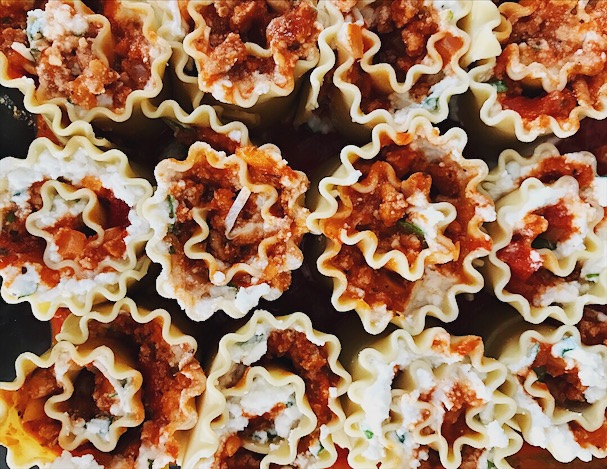 I served these with a SUPER simple Caesar salad {romaine, parmesan, croutons, thinly sliced shallots} and it was great, but you can serve with any salad of your choice.

in life + in the kitchen

Freckled Fork on the 'Gram